FBI Cautions There May Be More Bombs 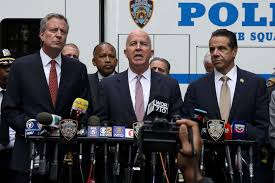 October 24, 2018 Following confirmation that Democratic Congresswoman Maxine Waters of California was the intended recipient of a suspicious package intercepted at a congressional mail sorting facility outside Washington, the Federal Bureau of Investigation is warning that other packages could have been sent to other locations and is asking for people to remain vigilant and avoid touching, moving or handling suspicious packages.

Later on Wednesday, a spokesperson for the Bureau of Alcohol, Tobacco and Explosives, Ginger Colbrun, said a second package addressed to Rep. Waters had been found at a postal facility in south central Los Angeles. Similar packages were sent to former CIA Director John Brennan, former Attorney General Eric Holder and liberal philanthropist George Soros. All packages had a return address of “Debbie Wasserman Shultz,” the FBI said.

New York City Mayor Bill De Blasio said during a press conference Wednesday that the bombs addressed to Hillary Clinton, Barack Obama and CNN in New York City are clearly acts of terror, attempting to undermine our free press and leaders of this country through acts of violence.

This investigation is of the highest priority for the FBI. We have committed the full strength of the FBI’s resources and, together with our partners on our Joint Terrorism Task Forces, we will continue to work to identify and arrest whoever is responsible for sending these packages,”

Most Americans remember the 2001 anthrax attacks following 9/11. However, using the mail or other services to carry out acts of terror is nothing new. In 1919, U.S. Postal Service workers intercepted 36 mail bombs targeting prominent people that had been mailed across the nation. One of the bombs was delivered to the home of a US senator from Georgia detonated, injuring the senator’s nurse.

No one was injured in any of this week’s incidents. Check back for details in this Breaking News story.