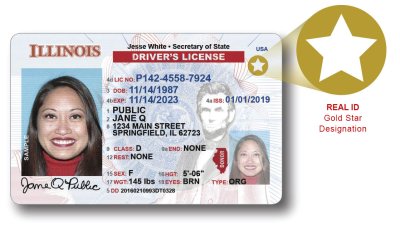 August 22, 2019 The TSA is rolling out a a new public awareness campaign to remind travelers they must be REAL ID compliant by the October 1, 2020 deadline. REAL ID-compliant cards are generally marked with a star symbol located in the upper portion of the card. Some areas will have state-specific stars for their REAL ID’s so looks may differ from state to state.

The Transportation Security Administration (TSA) public awareness campaign for REAL ID includes signs at airport security checkpoints warning travelers about ID requirement changes. Travelers will not be able to board a domestic flight without a REAL ID or alternative identification starting October 1, 2020.

Tomas Cuellar, TSA Transportation Safety Manager told CBS News the reason for the latest push is to avoid the rush.

“If you don’t get it done as early as possible, everybody’s going to be rushing at the last minute and we don’t want somebody to get in a situation where they come to the airport ready to fly on vacation and then suddenly they can’t get through”

Illinois was one of several states that boycotted the REAL ID ACT. In May, 2016 Illinois Secretary of State, Jesse White announced major upgrades to the state of Illinois driver’s licenses and identification cards. The enhanced security measures helped bring the state of Illinois closer to achieving full REAL ID compliance, a federal mandate of the U.S. Department of Homeland Security.

Since July, 2016, Illinois applicants no longer receive a drivers license or state ID in person at Illinois Secretary of State facilities. Applicants are issued a temporary paper and a new license or identification is mailed after a series of fraud checks to ensure the applicant’s identity.

Some Illinois residents expressed confusion in recent months over the difference between the state’s enhanced drivers license and REAL ID. Many drivers say they were not offered two options, and assumed the security enhancements were for the REAL ID. The Illinois Secretary of State’s office says there is no additional cost for the REAL ID card and assures residents there is plenty of time to obtain a REAL ID-compliant card if you need one.

“drivers that recently renewed, or if your license does not expire for more than one year, you may apply for a REAL ID and pay a $5 corrected fee. Your REAL ID will retain the same expiration date as your original license.”

The United States Department of Homeland Security website states that starting October 1, 2020, every air traveler will need a REAL ID-compliant license, or another acceptable form of identification, for domestic air travel.

The United States Congress passed the controversial REAL ID ACT in 2005, following a 9/11 Commission recommendation to take steps that would make it tougher to counterfeit government-issued IDs. The standards include verifying an applicant’s identity and conducting background checks on the state workers who issue driver’s licenses.

In order to qualify for any federal funding, states are required to link their databases with every other states’ so as to “provide electronic access by a state to information contained in the motor vehicle databases of all other states.”

According to the REAL ID ACT each state must:

RECOMMENDED: AMERICA: A GOLD STAR ON YOUR DRIVER’S LICENSE IS NOT AN UPGRADE