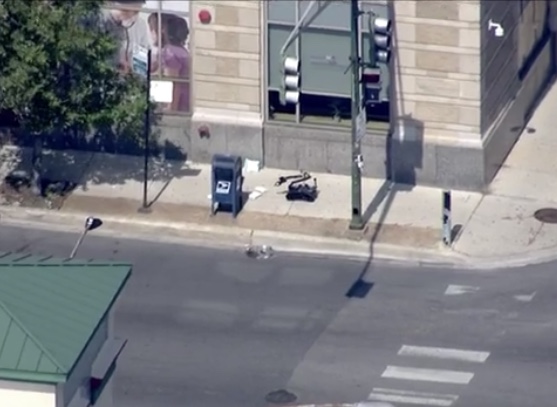 UPDATE: A bomb squad found no explosives and Chicago police said the package “appeared to be narcotics-related.” One person is in custody.

September 11, 2019 Chicago Police responded to a report of a suspicious object dropped in a mailbox in the Logan Square neighborhood on the city’s northwest side on Wednesday morning.

Multiple CPD units responded to reports that a suspicious object was dropped in a mailbox by an unknown person at Fullerton and Central Park Avenues in the city’s Logan Square neighborhood around 10:35 a.m. Wednesday morning. CTA buses are being rerouted.

Chicago Police Department bomb squad and hazmat were also called to the scene in the 3600 block of West Fullerton. Chicago Fire Department spokesman Larry Langford said crews are conducting a hazardous materials response after a suspicious package was found in a mailbox.

The package remains under investigation.

State and local law enforcement across the country are on heightened alert Wednesday, the eighteenth anniversary of the September 11, 2001 terrorist attack on the United States.

In the aftermath of 9/11, the U.S. Department of Homeland Security was created with the goal of preparing for, preventing and responding to future domestic terrorist attacks.

The DHS “If You See Something, Say Something” public awareness campaign was created as a tool to encourage Americans to play a role in preventing terrorist attacks. The Department of Homeland Security works with private partners year-round to inspire, empower and educate the public on suspicious activity. American citizens are encouraged and reminded to report suspicious activity, no matter how small to local authorities.

The Nationwide Suspicious Activity Reporting (SAR) Initiative (NSI) is a joint collaborative effort by the U.S. Department of Homeland Security, the Federal Bureau of Investigation, and state, local, tribal, and territorial law enforcement partners. This initiative provides law enforcement with another tool to help prevent terrorism and other related criminal activity by establishing a national capacity for gathering, documenting, processing, analyzing, and sharing SAR information.