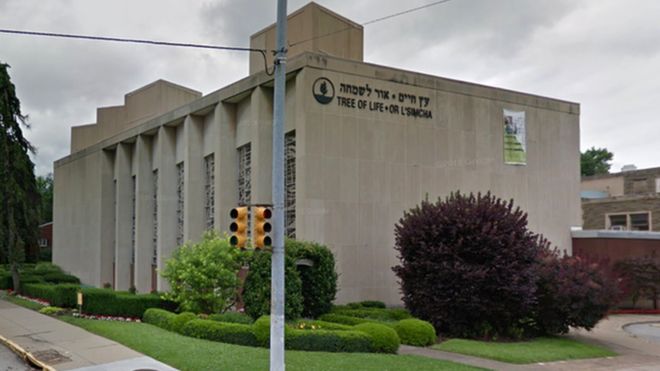 October 27, 2018 Pittsburgh Police responded to an active shooter situation Saturday morning at the Tree of Life Congregation synagogue in Squirrel Hill. At least eight people were killed and several others injured in the attack. Three police officers were shot in exchanged gun fire with a suspected shooter before he was taken into custody.

Pittsburgh’s Department of Public Safety tweeted that there is an active shooter in the area of Wilkins and Shady avenues where the synagogue is located. The residential neighborhood of Squirrel Hill is the hub of Pittsburgh’s Jewish community.

Since President Trump took office, there has been an uptick in hate crimes across the country including several incidents at places of worship. Many Americans, including lawmakers on both sides of the aisle have expressed concern over President Trump’s coarsening brand of political rhetoric. Trump condemned a series of attempted domestic terrorist attacks in recent days targeting high profile Democrats calling for unity. At least a dozen pipe bombs addressed to vocal critics of Trump, including former president Barack Obama and former vice president Joe Biden were intercepted by the FBI and U.S. Secret Service last week.

However, since then President Trump has repeatedly blamed the media and others for incivility, even as he refrained from acknowledging his own inflammatory rhetoric.

This is a developing story. Check back for details.