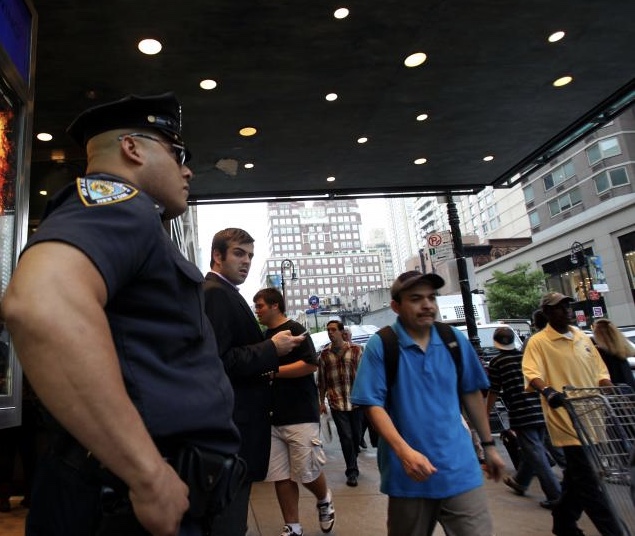 October 3, 2019 The Chicago Police Department will monitor large theater screenings of the film “Joker” when it opens on Friday.

Law enforcement agencies in other large cities across the country, including New York City and Los Angeles have announced plans to increase security patrols around movie theaters showing the “Joker” movie.

“Posts on social media have made reference to involuntary celibate (‘incel’) extremists replicating” the shooting “at screenings of the Joker movie at nationwide theaters.”

After some family members of the victims killed during a 2012 mass shooting at a movie theater in Colorado expressed concerns about the “Joker” movie, the Landmark theater chain announced a ban on costumes and masks during screenings of the film.

In July 2012 a gunman opened fire in a Century movie theater in Aurora, Colorado during a midnight showing of the Batman movie Dark Knight Rising, killing 12 and injuring seventy others. Century Aurora and XD in Aurora, Colorado, where the shooting attack took place announced last week the “Joker” movie will not be shown.

In the immediate aftermath of the Aurora movie theater massacre in 2012, local police departments across the country temporarily stepped up patrols at showings of the Batman film.

AMC theaters announced changes to security protocol. In a press release, AMC announced bans on costumes, face-covering masks and fake weapons. In a statement, AMC reminded customers ahead of the “Joker” premiere that it allowed costumes, but not masks.

“Guests are welcome to come dressed in costume, but we do not permit masks, face paint or any object that conceals the face.”

Soft targets, such as shopping malls, movie theaters, restaurants and schools have increasingly experienced violent attacks across the nation. In July 2015 a man opened fire inside a movie theater in Lafayette, Louisiana killing two and injuring nine others. The gunman then turned the gun on himself. One month later— a man with a hatchet attacked movie goers at a Nashville theater before he was shot and killed by police.

America’s movie theaters are among the vast majority of the nation’s privately owned public space. With few exceptions, public safety is left to business owners and management.

The federal government’s role in protecting the public is limited to suggestions and incentives. After the 2012 Aurora massacre, the U.S. Department of Homeland Security announced a partnership with some of the countries large movie theater chains to roll out its “If You See Something, Say Something” public awareness campaign, which reminds movie goers to remain alert and report suspicious activity to authorities.