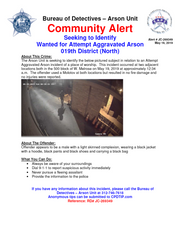 May 20, 2019 Chicago Police are on high alert following an attempted arson at two adjacent Synagogues in the Lakeview neighborhood over the weekend.

The Chicago Police Department announced they are stepping up patrols at Jewish schools, businesses and synagogues on Monday, after an attempted attack on a synagogue with Molotov cocktails.

WLS Chicago reports that between Saturday night and Sunday morning, a man threw three bottles filled with accelerant at the Anshe Sholom B’nai Israel Congregation and at an adjacent community center. The FBI and Chicago Police are investigating the incident, which was caught on surveillance video as a potential hate crime.

The surveillance video shows a male with a light-skinned complexion, wearing a black hoodie, black pants, and black shoes while carrying a black bag.

“The Arson Unit is seeking to identify the below pictured subject in relation to an Attempt Aggravated Arson incident of a place of worship.  This incident occurred at two adjacent locations both in the 500 block of W. Melrose on May 19, 2019 at approximately 12:34 a.m.  The offender used a Molotov at both locations but resulted in no fire damage and no injuries were reported”